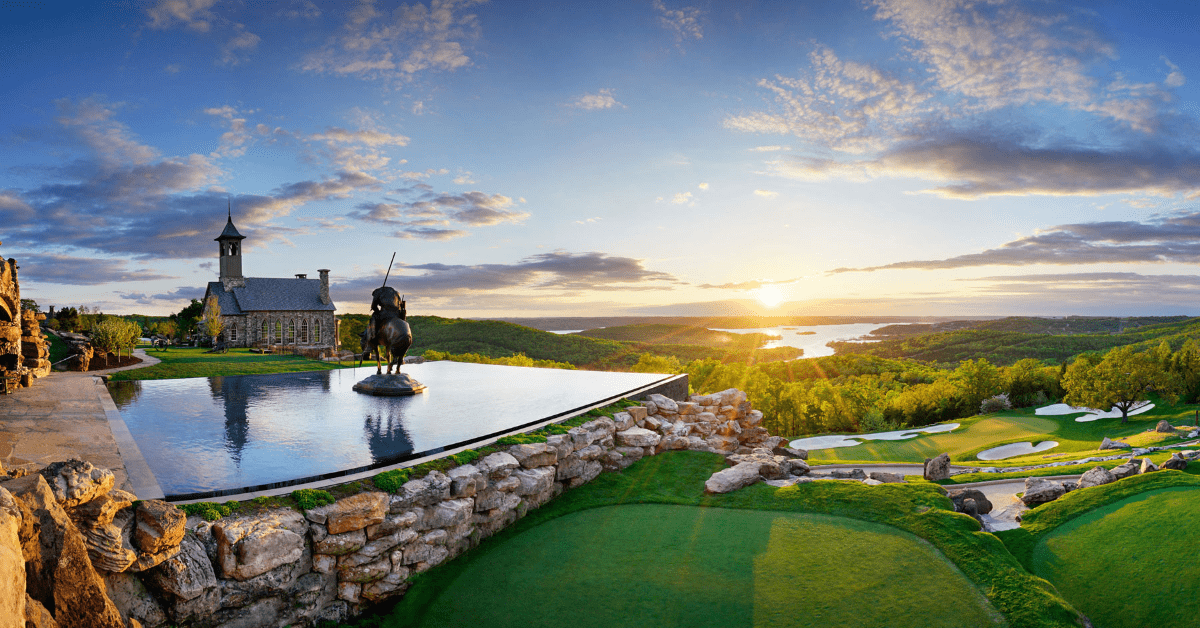 The Ozarks are a bit of a mystery. This often-overlooked corner of America spans the southern area of Missouri and the northern territory of Arkansas. It also covers parts of Southern Illinois, Oklahoma, and southeastern Kansas for good measure.

This region of the country, known as the Ozark Mountains, is a heavily wooded territory covering around 47,000 square miles. With limestone cliffs towering high above the crisscrossed paths and streams and hamlets previously home to moonshine producers.

The Missouri side is charming and relaxing, brimming with Americana appeal. The side in Arkansas is thriving as a result of an increase in companies settling in the northwest region; it’s particularly great for art connoisseurs.

Here is a guide to visiting the area; beginning with the northernmost region and a grand hotel as a home base. Then heading south, ending with a visit to one of America’s greatest modern museums.

Big Cedar Lodge is the pinnacle of a luxury wilderness lodge, nestled in its own forested glen on 800 acres of craggy Ozark Mountain wilderness. Johnny Morris, the owner of Bass Pro Shops, bought the modest property only 10 minutes south of Branson with the intention of establishing a small fishing camp for his workers. The final renovation resulted in a hideaway overlooking Table Rock Lake’s blue-green waves. It would be a waste not to cast a line here, since there are lots of expert guides available, as well as boat rentals for a no-doubt beautiful day on the lake.

However, if fishing isn’t your thing, there’s also a world-class spa. Accommodation ranges from lodge bedrooms with jacuzzi tubs and gas fireplaces to a handful of cabins with stone fireplaces, hottubs, and private decks with grills. These are popular with returning visitors. Top of the Rock, the lodge’s newest feature took Morris more than five years to complete. There are two restaurants, a bar, a wine cellar, a huge nature path, a cave and waterfall. As well as a Jack Nicklaus-designed floating golf course.

Moonshine has undoubtedly become a trendy product in bars these days. Bootlegged booze has a long history in the Ozarks however. Because of the caves, this part of America became a popular spot for manufacturing white lightning. Copper Run was founded in 2008 by master distiller Jim Blansit and co-owner Aris Aristidou, who joined their tiny crew in 2012. Both Jim and Aris have boyth been distilling for a long time, long before they were legally permitted to drink it. They both saw the process as more of an art form than a business. When visitors come to the small-batch distillery, they notice it feels more like a comfortable little cottage than a factory.
There are tours every couple of hours where the employees show off the operation consisting of two stills and a an assortment of other equipment. Small-batch bottles of moonshine, aged whiskey, rum, and limited release bottles. Make sure that you try the hopped wheat whiskey which is sold in smaller numbers. These liquors are very drinkable as a result of the limestone present in the area’s water. Nothing beats a drink prepared with fresh apples, vanilla, cinnamon, and moonshine in the fall.

Eureka Springs, in the highlands of northern Arkansas, has long been a place for outsiders and misfits. These days a lively mix of bikers, accountants, artists, and a strong gay community all live here. The downtown area’s beautiful streets are peppered with lively restaurants and beautiful hotels, many with original Victorian architecture. Unsurprisingly, there’s a lot of art to look at in the local galleries and stores. Also tarot readings and spas that utilize the therapeutic waters of the town’s natural springs.

This bustling city, which is home to the University of Arkansas, has a busy vibe as a result of the ever-growing big corporations that have come in and enhanced economic growth here. You could spend a full day visiting the entire town, which is home to top-tier independent design stores that are enthusiastically supported by local vendors. But it’s Dickson Street, on the outskirts of the campus, where you should park your car for the day. The street is lined with trendy restaurants and bars, galleries, upscale shops, independent bookshops, and, of course, a thriving food truck culture.

This hotel is one of an art-focused mini-collection that has garnered awards across the United States. The Hive, the restaurant on the first level, is also first class; sleek and quirky, with modern touches like neon green penguins, but still deeply anchored in Ozark culture. Under the supervision of head chef and Arkansas native Matthew McClure, the restaurant pays homage to the South with refined country cuisine.

Expect the menu to feature ingredients such as locally milled corn, hickory-smoked meats, sweet onions, peaches and black walnuts. The offerings are sophisticated but accessible. He bakes cornbread topped with rich mascarpone. Pickled shrimp with salt-cured country ham and mustard greens, or zesty pimento cheese topped with sweet bacon preserve. The cocktail menu is creative and the wine selection is excellent. It’s not uncommon to order a PBR in an ice-cold glass though. Again, it’s refined, but it’s still the high South around here.

Crystal Bridges Museum of American Art was conceived by architect Moshe Safdie at the foot of a natural ravine in the Ozarks. It was built at the bequest of Alice Walton, an heir to the Walmart empire. The museum gets its name from the adjacent Crystal Spring, as well as the two massive copper bridges placed across the pond when the edifice was completed. The museum, which lies on 120 acres of land and is bordered by 500 dogwood trees, was designed to allow visitors to enjoy both nature and art at the same time. After a day of admiring paintings by Norman Rockwell, Gilbert Stuart, Andy Warhol, and Charles Sheeler, spend the afternoon hiking one of the museum’s five trails.What to do in The Ozarks